A Permian Basin E&P customer sought way(s) to reduce the operational impact to prospective frac interference wells before, during and after infield hydraulic fracturing operations.

Conventionally, landing production tubing in hanger without tension and utilizing a production tree on the wellhead to withstand the pending hydraulic pressure to an existing legacy oil well wellhead brings the following undesirables: 1) Incrementally added cost post frac interference to replace production tree to lower pressure rod tree and to place tubing string in tension; and 2) Oil production is interrupted for a prolonged period of time.

Alternatively a Safe Tension Tool (STT) is placed in the
production tubing string beneath the hanger pre-
frac. It is actuated to place the tubing string in
tension and the well is produced right up until frac
operations are to commence. It allows for flanged
high pressure rod B.O.P.s to be used during frac
operations and production can immediately be brought back on line post frac.
The Permian Basin E&P customer chose to utilize the STT system within their frac interference operation as it:

A major E&P customer required a 4800m MD foothills well to be recompleted as the production tubing failed near the wellhead, dropped and remained lodged at approximately 500m. 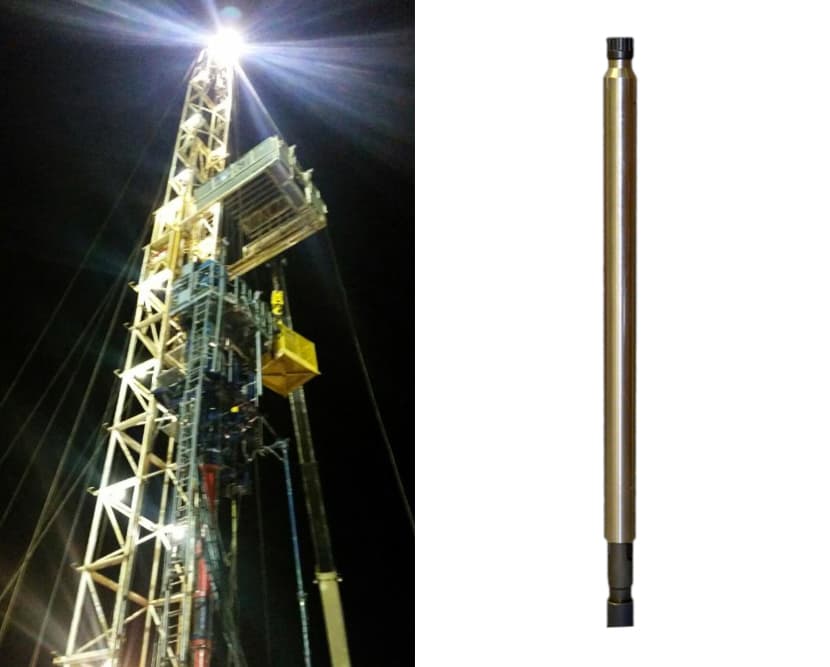 Due to the strong live well conditions and the need to reestablish the production tubing it was decided to snub the required production string segment into the well. As part of the intervention design 3 Progressive Safe Tension Tools (STT) located directly beneath the tubing hanger were required in order to properly space out the 3100m long, 60.3mm tubing string. The tubing segment was successfully connected to the production tubing with a full drift on/off tool. The STT setting spear was used to retract the STTs individually and to space out the tubing string as desired. The operation went seamlessly and was completed without incident. The well was then brought back on line as planned.

In these trying times, enhancing operational value is of primary importance. Given the uncontrollable, persistent low commodity price environment that we are currently in, the only way to enhance value then is to focus on operational costs.

Oil and Gas assets that provide operational challenges like corrosion, organic/inorganic deposition, emulsion and other naturally occurring challenges that reduce production by interfering with and reducing the efficiency of the concerning ALS can be efficiently controlled with a cost effective chemical placement system. The performance of which is greatly enhanced when the appropriate chemical is placed at the inlet of the bottom hole pump.

A very successful way to transport chemical down hole is with continuous capillary line. When properly controlled a capillary line injection system can reduce chemical costs by as high as 80% when compared to batch and casing annulus injection from the wellhead. While proven to greatly reduce downtime, improve efficiency and ultimately reduce operational costs.

When considering a reciprocating rod pump ALS there is additional complexity for chemical conveyance in that the production tubing is anchored and placed in tension. The anchor is positioned above the reciprocating rod pump and therefore acts as a barrier not allowing for chemical capillary line to run passed it and into the inlet of the bottom hole pump. To add to this challenge is the way in which anchors are set. As conventional anchors require many turns of the production tubing during setting operation which would in turn compromise the capillary line.

Furthermore, for wells that require a second barrier of well control, specifically requiring the BOPs to be engaged, threading capillary line through the wellhead is extremely unsafe and is in contravention to the requirement.

A two fold improvement to the mechanical anchor design has been made to facilitate the successful application of capillary line (see figure 1).

1. A major redesign of the anchor body which provides sufficient annular area for capillary line to by-pass it and terminate into the rod pump beneath.

2. A major redesign to the setting system that now only requires a quarter turn to set the anchor. Therefore the capillary line is no longer in jeopardy during anchor setting procedure. Finally adding a “catcher” capability which prevents tubing from falling should it fail above the anchor. 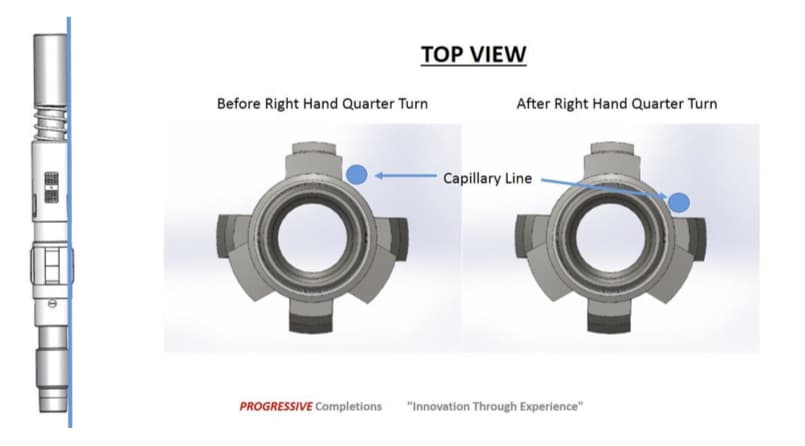 The second part to the solution was to develop a tool that allows for:

1. Capillary line to thread through the production tubing hanger with BOPs engaged,

2.The production tubing string to be placed in tension with full well control.

The Safe Tension Tool was developed to do just that (Figure 2). It is the only one of its kind and was designed, developed and patented by Progressive Completions Ltd. It is a telescopic tool that connects directly beneath the wellhead production tubing hanger. With BOPS installed with full well control the tubing hanger and capillary line are pulled through the BOPS allowing for the safe plumbing of capillary line through the hanger. The hanger is then lowered back through the BOPs and into the wellhead. The system is then ready for setting the Quarter Turn Anchor/Catcher. Once the anchor is set the Safe Tension Tool is then pulled and retracted sufficiently to place the entire production tubing string in tension without compromising the capillary line.

This system is now being used throughout North America with customers ranging from Juniors, Intermediates and Fully Integrated Major Oil and Gas Companies.

Examples range from: successfully incorporating the system in an entire field to greatly reduce the effects of paraffin to the bottom hole rod pump; to enhancing the performance of problematic wells; and everything in between.

It has recently been recognized as a solution by an operator in the Permian Basin. The application of which was to convey chemical toward the inlet of the reciprocating rod pump ALS so as to reduce the effects of scale build up which ultimately extended run times and subsequently reduced operating costs.

Reciprocating Rod Pump Lift systems is by far the most popular artificial lift system in the industry today. Because of its popularity and effectiveness it continues to be used in more extreme applications. By providing a cost effective chemical placement system that helps rod pumping systems overcome the negative effects of corrosion, paraffin, scale, emulsion, other rheological and mechanical challenges will improve its operational performance, reduce down time and enhance production volumes. Progressive Completions Ltd.’s involvement in the development of the Quarter Turn Anchor/Catcher and Safe Tension Tool further enables the effectiveness of the system ……..creating more value.